Bournemouth University has unveiled its “game-changing” LED wall for virtual production as it looks to build a partnership with the new Livingstone Academy.

Premium Event Productions (PEP) has temporarily provided the university with a large LED wall, the same type used in the production of Star Wars spin-off The Mandalorian.

And the university now hopes the new technology will help put Bournemouth on the map for virtual production.

Mark Brocklehurst, director of operations for the faculty of media and communications, told the Bournemouth Echo: “We’re carrying out research into virtual production techniques.

“LED walls are quite common, you see them at sporting events, but it’s the technique of filming an actor in front of a scene and then using the software to deposit that in real time. We’re exploring how we can embed that technology in our courses.

“Traditional techniques require shooting a character in front of a green screen and then shooting the background elsewhere.

“Now we can use library footage so we don’t need to go out and capture backgrounds. It’s transformation, not just for the industry, but for the university.”

The unveiling of the LED wall was also attended by the co-founders of the Livingstone Academy:  Games Workshop entrepreneur Ian Livingstone and Steve and Paula Kenning, CEOs of the Aspirations Academies Trust.

It is hoped the collaboration between the academy and the university will provide young students with a clear route into the digital and virtual production industry. 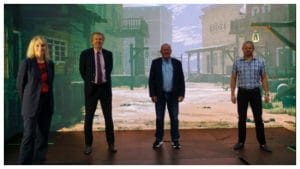 The LED wall will also help the university with its carbon reduction targets, especially with the reduction in travel to shoot in locations.

Mark said the university was looking to invest in its own wall in the future to make Bournemouth a “content creation centre”.

The university had a proposal for a £6-to-£10 million investment in virtual production and were working with stakeholders to secure the funding.

And the man behind the new Livingstone Academy, Ian Livingstone, co-founder of Games Workshop, attended the unveiling hoping to build a partnership with the university.

Mark added: “Ian was awarded an honorary doctorate for BU many years ago. He is the founding father of the games industry so it’s incredibly important he continues to work with us.

”His contribution to the Livingstone Academy means those students have destinations.”

Ian Livingstone, whose school will have a focus in science, technology, engineering, arts and maths, said: “It’s great to have this facility on our doorstep.

“We’re all about know-how as well as knowledge, trying to contextualise the learning and the knowledge being applied.

“If they can come here and see the magic that’s created here, it will open their imaginations and inspire them to become the next producer of digital content.”

Steve Kenning said: “If the kids come to school and there’s a route into this kind of industry you’re going to have a job for life.”

Paula added: “We’ve seen today people working together in a highly-collaborative fashion, we’ve seen it in action, the very effective way these guys are working we need to mirror that in the way the children are working in the schools.” 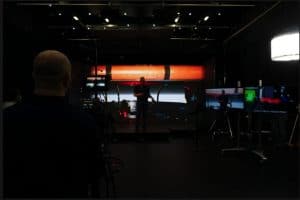