29 January 2021 New pictures & video reveal Livingstone Academy Bournemouth’s progress: With just 7 months to go, how are the builders getting on?

With just seven months to go before Livingstone Academy Bournemouth opens its doors for the first time, the countdown has started.

Builders at Kier Construction have been busy transforming the school’s site on Madeira and Stafford Roads and we’re delighted to showcase their efforts with new pictures and video content.

The £28.5 million project will see a complete overhaul of the site which was once home to a Magistrates Court, grade II listed coroner’s court and a police station.

Once completed, the all-through school for students between the ages of 4 to 18, will become an ‘’oasis of learning’’ and the country’s first state-of-the art digital academy with a focus on STEAM (Science, Technology, Engineering, Arts and Mathematics).

During its first year of opening in September 2021 the school’s intake will be Reception and Year 7 students only.

Other year groups will join in subsequent years.

So how are the Kier Construction builders getting on?

Our video footage and new images, taken by Kate Redman, Aspirations Academies Trust CEO for the South Coast and Budmouth Academy‘s Vice Principal, Jen Warr, provide a glimpse of the work that has been done.

You can see the break-out spaces for project-based learning, creative thinking and innovation rooms, starting to take shape.

The former Coroner’s court will be used as a Sixth Form and the original wood panelling, original seating and benches have all been kept. The students will also enjoy the high ceilings in the building. 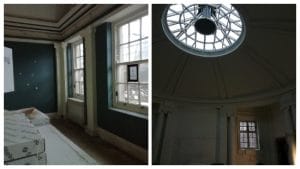 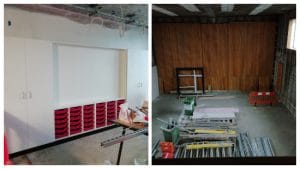 Architects Giancarlo Pesiri and his colleague Lucinda Colegate at Noviun Architects who have been entrusted to bring their ideas to life.

The academy will be awash with new paving, a courtyard, seating areas and greenery from planters, trees and landscaping all of which will be used to create boundaries. Mr pesiri said the overall feel would be that of an ”oasis of learning in Bournemouth’s city centre.” 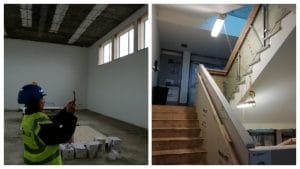 The Magistrates Court will be turned into a primary school, the Coroner’s court will become a sixth form and the police station will be cleared to create a state-of-the-art secondary school complete with multi-sports facilities.

Mr Pesari has previously said: ”This project is a marriage between old and new and is a great example of repurposing. Inside the Magistrates’ Court there will be open plan classrooms and a contemporary learning environment.

”It was originally a grey 1960s building, but the outside is going to look very different. It will have coloured windows and big canopies and we will be using interior design to brighten up the building. 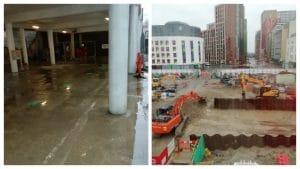 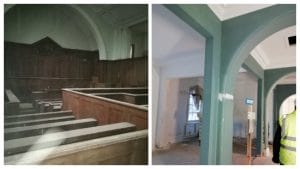